I have to get up early to go to Phnom Penh since it’s almost 5hrs drive from Siem Reap, and I have to go back to Siem Reap the same day also. I know it’s pretty tight schedule for me (and very tiring!) but I don’t wanna leave Cambodia without visiting the Killing Fields and S21 prison.

If you remember anything about the Khmer Rouge, it was a communist regime that overthrew the democratic republic of Cambodia back in 1975, during America’s Vietnam war era. The Khmer Rouge were led by a man named Pol Pot who flunked out of college in France, and in his anger embraced a number of communist ideals and came back to Cambodia to put them into practice. The most heinous was his principle of transforming Khmer (Cambodian) social values into a ‘glorious’ peasant working class.

To make the long story short, the Khmer regime killed 3 million people in 3-4 years, which at the time was 1/4 of Cambodia’s entire population. They killed all students, teachers, monks, people who wore glasses, politicians, musicians and anyone that could be considered intellectual. This was because the KR wanted Cambodia to be an agriculturalist society – they only wanted people they could boss around to live there.  They even killed thousands of their own men, women and children as punishment, as well as all the foreigners and travellers that were in the country at the time of the take-over.

The S21 Prison is in town (Phnom Penh) and the Killing Fields are about a 20 minute Tuk Tuk ride to the edge of town. You can hire a Tuk Tuk to take you to both and they will wait while you tour one before the other. Most people do the Killing Fields first but I did the prison first to follow the path of the prisoners (they would be moved from the Prison to the Killing Fields for execution). I really felt this was the most meaningful way to tour them.

When you walk around prison it is hard to even imagine the horror of what happened. The sun was shining, birds were tweeting and the whole area, especially around the lake seemed so peaceful. 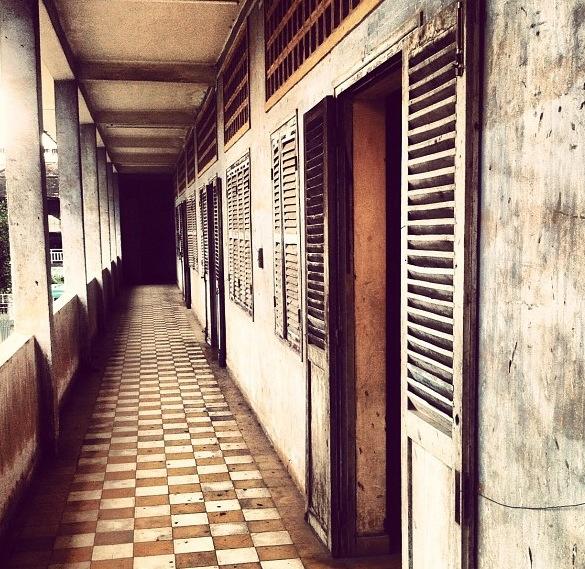 No one spoke during the tour, instead we listened intently to the devastating account of the few survivors and a narrator explaining the torture and humiliation that thousands of innocent people experienced under the ruling of Pol Pot.

Victims were tortured here into confessing to crimes that they did not commit such as contact with foreigners or any part of the outside world. 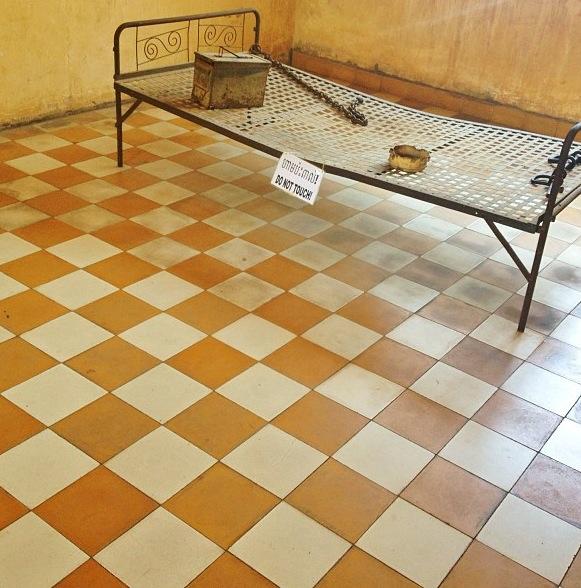 The Vietnamese soldiers who found S21 after they had taken control of Phnom Phen took a picture of each cell as they found it with the dead bodies still in them. Today the bloodstains are still on the floors, walls and ceilings and there is a chilling smell in each one. 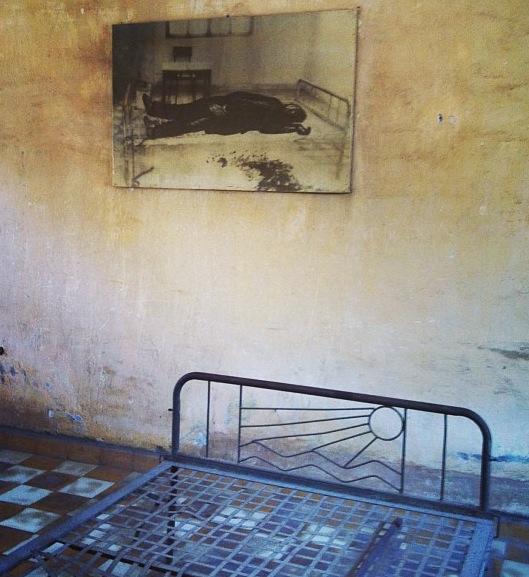 There was an exhibition showcasing the torture tools and methods used to extract information. The methods of torture varied from beatings and electric shock to pulling out fingernails and pouring alcohol on the wounds.

Electrified barbwire surrounded every building of the S-21 complex. 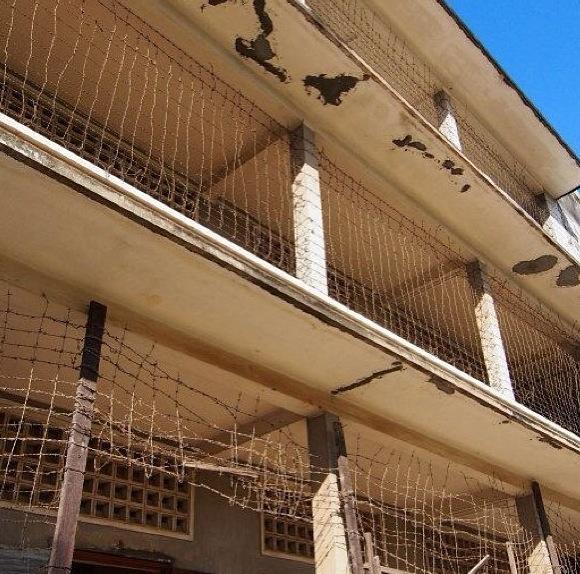 There was no escaping

From the S21 museum, the tortured and beaten prisoners were taken out to the Choeung Ek Killing Fields, 15 kilometers away. Here they were executed or buried alive in mass graves.

The tree below was used to smash babies heads before they were thrown in the graves. Officers would swing them by their legs like a club. 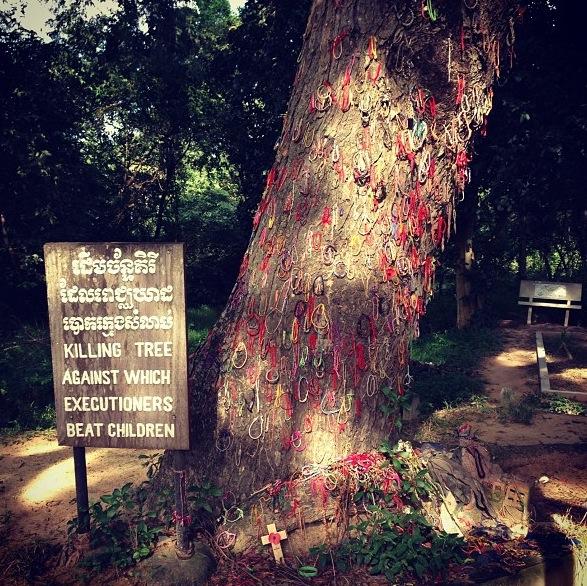 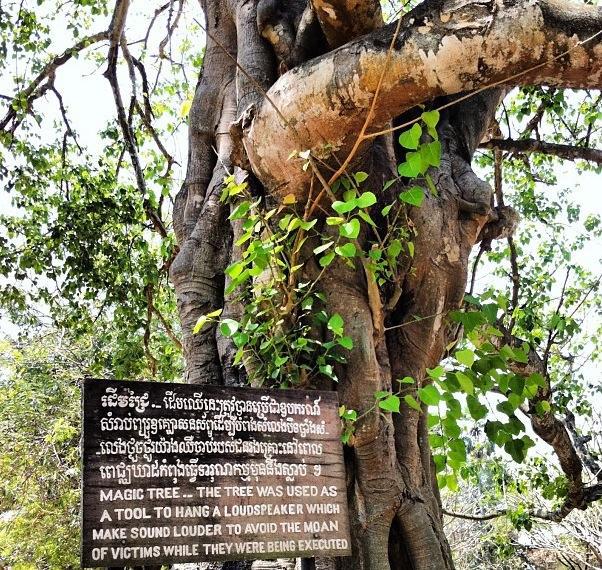 Another tree use to have a loud speaker on it where music was loudly played to drown out the screams of people being murdered.

From the audio set, I heard the actual music being played while the generator was grumbling at the background. The sound still lingers inside my mind.

What I have learned:
Unfortunately, it seems there are some people in the world capable of great evil.

Genocide did happen in Cambodia. And again in Eastern Europe. And does today in Middle East.

Learning about the dark sides of human history is absolutely necessary. We must observe what we are capable of, learn what caused it, repent for our mistakes and prevent it from continuing today. We are failing on this last point.

I am at a loss as to how this can change, but I do believe that if more people were exposed to the awful truth of what has happened we may collectively learn from it. We really don’t appreciate life till we hear and see the atrocities in other countries. More people should be exposed to the history of the wars of this world, maybe then we will be a better country with peace.

“Genocide has happened many times in history, in Nazi Germany, Rwanda, Bosnia… and unfortunately it’s likely to happen again. Remember us when it does”

The country still has so much healing to do..