Home » Been To's » Amsterdam: It’s a Free City, Everyone is Happy!

Some tourists think Amsterdam is a city of sin, but in truth it is a city of freedom. And in freedom, most people find sin. – The Fault In Our Star

Amsterdam is one of my dream (and now becoming my favorite) European cities. The city is much more than the drugs, prostitution, which the world knows it for. There are many things to see, do and experience in this vibrant city.

The ambiance of the canals, the architecture, the bicycles, the people and the shops, bars and cafes are what Amsterdam is all about. They are the contemporary live museums of Amsterdam. The view is spectacular and to enjoy the canal you could opt for a bike ride or a simple stroll. There are a whole lot of restaurants and pubs where you could enjoy a peaceful evening. The place is best for photo enthusiasts as the whole structure and layout of buildings around the place makes for gorgeous pictures.

This was an absolute highlight of my trip to Amsterdam. I love this tour! The Anne Frank house museum gives such insight into the lives of a Jewish family hiding during Nazi occupation in the Netherlands during World War II. The house is an annex of Anne’s fathers business where the Frank family and others hide out for a couple of years before being discovered by the occupying forces. As you move through the house, you are absolutely able to imagine how her life was. An amazing story with amazing lessons to be learned. Note: you are not allowed to take pictures during the tour. Just a tip: tickets can be purchased online and this will allow you to bypass the general line, which is usually long and will take you an hour or so of waiting. But you need to be buy it weeks in advance. Less hassle ;)\n\nRed Light District

You could not possibly go to Amsterdam and not take a stroll around the famous Red Light District. The area is situated in a fine location around the canals and there are lots of small bars. It is not as seedy as you might expect but it is certainly very busy. I would suggest to walk through all the connecting alleyways too, sort of a zig-zag to ensure you’ve seen it all. The shops sell some real hilarious stuff too apart from the you-know-what’s. I felt absolutely safe wandering around the alleys as much as the main street and also respected enough at the shops; nobody gives you weird looks. Great experience, but only for adults. Not that the “workers” are nude or anything, but they are known to make provocative and suggestive motions, etc, so it’s definitely not fit for children. Considering there are only a few places in the world that have “legal” prostitution (which isn’t necessarily what it’s all about) it is definitely not to be missed!

On our stroll through Amsterdam we entered the innocuous gateway which led into the Begijnhof, what a delight! This oasis of calm in the middle of the city was a very welcome sight. The pretty gardens surrounded by houses ( one of which was the oldest in Amsterdam) were a treat. There are also two chapels in there. How to go: When walking on the Kalverstraat you can enter this wonderful place via the “Schuttersgalerij” (a beautiful hallway with old paintings of the 17th century, part of the Amsterdam Museum but you can pass through it without paying any fee), and you can leave the Begijnhof via the Spuiplein. 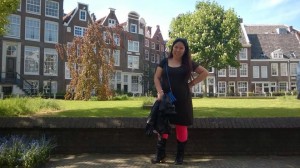 It all started with the stroopwafels (thin waffle filled with caramel syrup), the first ever Dutch sweet I had. Then there’s the Poffertjes, these are traditional Dutch fluffy pancakes that are light, spongey and delicious. Don’t forget to try Bitterballen (meat-based fried snack), Haring (Dutch seems to have a love affair with this one small, slippery, slimy sea creature) and other fishes like Makreel, Paling and Kibbeling(deep-fried nugget-sized chunks of cod). And ofcourse, the tasty and world’s best fries, Patat. Patat is best served with Pindasaus (peanut sauce) and onions. I drool everytime I eat this heavenly delight. Yum!

Amsterdam is one of those places you must visit if you would like to spend time in a city that has much to offer. If you are planning to go here soon, don’t forget to do your research as well. You can still find more interesting stuff to do/see/eat aside from the things I enumerated above. They say that it’s expensive here, well I thought otherwise! I find Paris a total rip-off as compared to Amsterdam. And Hello?! This is Europe! 🙂